Small dilated blood vessels, larger ones - telangiectasias on the face and telangiectasias, or spider veins on the legs, as well as superficial erythema - all these vascular defects are successfully overcome by the SpaClinique team, equipped with the Fotona4D neodymium-yag laser, from the most modern laser system in the world.

The Fotona4D neodymium-yag laser, with a wavelength of 1064 nm, emits the deepest penetrating beam on the market, which enables it to destroy blood vessels with a large diameter, even those deeply hidden under the skin. Its monochromatic, unidirectional and selective action ensures the highest effectiveness and minimises the risk of tissue damage. The device is one of the highest achievements of Fotona4D  brand, a world leader in the design and manufacture of laser systems.

How does laser treatment of erythema and closure of spider veins work?

The neodymium-yag laser uses the phenomenon of photothermolysis to reduce and eliminate the problems of vascular skin. Intense laser light is absorbed by the pigment (haemoglobin) found in red blood cells and converted into thermal energy. Under the influence of the thermal phenomenon the blood vessel evaporates and seals itself - coagulates.

Indications for treatments to remove erythema and close blood vessels:

For a few hours after the treatment you may feel a burning or pinching sensation and your skin may be more tender. In some cases the erythema intensifies but lasts only a few hours, a few days at most, which you can mask with make-up. We recommend cooling the skin with cold packs and using special cosmetics after laser treatments. Do not massage or rub your skin for 5-7 days so as not to irritate it further. Give up more invasive cosmetics for a few days, including soap and cosmetics with alcohol. Reduce physical activity for a week and abstain from sports. Do not use scrubs for 7-10 days. Do not use hot baths or sauna for 2 weeks. Do not sunbathe for a month and use the highest UV protection. In case of vascular treatments on the legs, use compression stockings (7-10 days)

One treatment usually does not give complete removal of vascular problem. Therefore, it is necessary to perform several treatments, for example, in the case of the so-called spider veins on the legs (venangiectasia) from 1 to 4 repetitions. In the case of telangiectasia, i.e. dilated capillaries on the face, we recommend 1-3 treatments with the Fotona4D neodymium-yag laser. The erythema treatments are also performed in series for the desired calming of the vascular game.

Treatments with the Fotona4D neodymium-yag laser, which is part of the most advanced Fotona Dynamis SP laser system, are characterised by the highest level of safety. It is guaranteed by, among others, innovative solutions such as VSP, i.e. Variable Square Pulse, which prevents the inconsistent distribution of energy, protecting the device from the risk of overheating or burning the tissues. EFC, or Impulse Feedback Control, is another solution that maintains a constant level of laser light. Thanks to it, the treatments performed are 100% effective, the patient does not have to fear that he/she will receive an incomplete treatment or - due to an increase in indices - will risk damaging tissues. Fotona4D is among the leaders in the development and production of technologically leading laser systems, whose effectiveness is confirmed by dozens of studies.

Read more about our Services and Treatments

I’ve had multiple treatments with Spa Clinique and I am so happy! All the treatments speak for themselves with AMAZING results. Great atmosphere and even better staff. Magdalene is phenomenal and know exactly what she's talking about. I would recommend this Clinique to anyone looking for great service, products and even better results!

For numerous years now, I have been going to Spa Clinique for non-surgical anti-ageing treatments. My experience at the clinic was always excellent, relaxing and rewording!Qualified stuff makes your experience smooth and enjoyable. Highly experienced and skilled owner Magdalena always recognises what is best for you, which treatment you need. Magdalena treats you like celebrity, there is only bespoke service, you truly feel unique. The spa always smells beautifully and shines. Magdalena always makes sure you feel happy and you are well informed. Prices are reasonable in comparison to other Clinique’s for the same treatment.

For someone like myself who has oily/combination skin with the occasional breakout, Magdelana has saved my life! I have had facials all around London for over ten years and I have never seen results like it! Highly recommended.

Outstanding clinic!The whole team is extremely friendly and there is very pleasant atmosphere. Magda, who is the manager, is probably the loveliest person I have ever met but most of all she is very knowledgeable, offers spot on advice on required treatments and is very skilled. I had recently treatment for spider veins removal from my legs and face and couldn't be happier with the service and the results. I will be definitely coming back as it's difficult to find such an unique clinic, which can be trusted. I will have next facials and laser hair removal - can't wait. I highly recommend Spa Clinique!

Really nice clinic. Clean and professional. Magda is very thorough on laser hair removal and offers sound advice based on the condition of the skin each session and the reactions from the previous ones. She has listened to my concerns if I have any based on post treatment reaction and offered advice and solutions. She has done some great package deals on the laser for me. I was surprised how quickly the hair reduced. I would recommend her laser hair treatment.

BEST EXPERIENCE EVER! I've been coming to Spa Clinique for quite some time now, for various treatments, and recently places owner convinced me to try laser hair removal. They have two lasers, so there is no problem with booking anymore. Second laser was bought couple of weeks ago and believe me it's AMAZING! It has two heads, for different body areas and programs that adapt to your type of hair!

I've been coming here for the last 7 years and got fantastic results after the second session. The most competitive prices and the best service. You get an appointment right away and the most pain free service! Laser here will change your life

Highly recommend them to everyone am having my laser hair removal treatment with them and the hair is 90% less then before I gave their phone number to all my friends.the staff are very nice and helpful.always trying to satisfy you and makes you happy.

Amazing staff, extremely friendly environment. Had trued many different places before here, this one turned up to be the best. The results were by far outstanding! Definitely would recommend to anyone!!!

I had the Intraceuticals Oxygen Infusion Facial which I would highly recommend to anyone looking to achieve glowing refined skin this season. This salon provides amazing top quality treatments, I will definitely be returning!!

I have such a lovely experience with Spa Clinique and Margareta’s massage was just fabulous. She is truly one of the best! The atmosphere was lovely and relaxing! Will certainly be back soon.

I have been going to Spa Clinique for over a year now as I purchased a laser (hair removal) course. The treatments are very effective and I am seeing great results! The manager Magdalena is lovely! She is helpful and accommodating. The other staff members are warm and welcoming! I trust their beauty recommendations and I look forward to having a rejuvenating facial next week so I am ready for the New Year! Thanks ladies!

I went with my mum and neither of us new what to expect. They were very accommodating allowing us to be in the same room (it was girlie weekend trip as my mum was visiting me here in London). We booked the night before and I have to say it was one of the best we've had in the UK in the last year!! We both needed to relax and chill and this did the job!! Thanks ladies :) we will be back!

I’ve been seen Magdalena and her team for about 1 year and I have to say that she is absolutely lovely and professional, her services are great and give results. I highly recommend Spa Clinique if you live in the Fulham area.

The whole experience was just delightful and incredibly professional; from a pain free wax (well, as much as possible!) to recommending hair removal options that may be better for me, I was really impressed with my therapist's expertise. Will definitely be back!

I recently booked a holiday to Dubai with my boyfriend and in the lead up I was really stressful about my hair situation as I'm allergic to the wax strips and shaving is always a nightmare. I booked in for the laser hair removal and over the last few months i am SO happy with the results!! my beauty routine has practically changed and my confidence is through the roof! Thankyou for everything, you've been a dream!!!

My entire experience with Spa Clinique was amazing. I had the T-Shape Cellulite Reduction treatment which delivered targeted results and was incredibly relaxing. The facialists are also incredibly knowledgeable, I left with amazing glowing skin, cannot recommend the Oxygen Facial more readily! Top quality service!

I've been coming to see Magdalena and her team for my laser treatment for the past few months and it has been the most fantastic experience. Results are incredible, the clinic is lovely, clean and everyone is so nice and professional. Without a doubt, this clinic is deserving of 5 stars and more. Will be looking into having more treatments here for sure! I recommend this place to all my family and friends. Thank you Spa Clinique for looking after me so well!

are rated 4.9 out of 5 for "Fotona 4D | Veins and Vascular treatments | Spaclinique London Fulham" based on 1227 reviews from Google, Treatwell, britainfirm.com and Book Your Lifestyle.

Now that Autumn has arrived, it’s a time of year where our skin requires that extra bit of care. The exposure to sunlight, and unfavourable weather conditions can have an adverse affect on our skin, which can irritate and significantly weaken the condition of the skin.

Here at Spa Clinique, we offer moisturising and brightening treatments, which currently are at discounted prices.

Focus on cellulite by Spa Clinique London | 25% off

See below how to effectively fight cellulite and find out about promotions for treatments.

Cellulite is an abnormal distribution of adipose tissue as well as pathological changes taking place in the subcutaneous tissue. These are mainly patches and unvennes that are visible to the naked eye. Orange peel, or cellulite, appears most often around the abdomen, hips, buttocks or forearms. 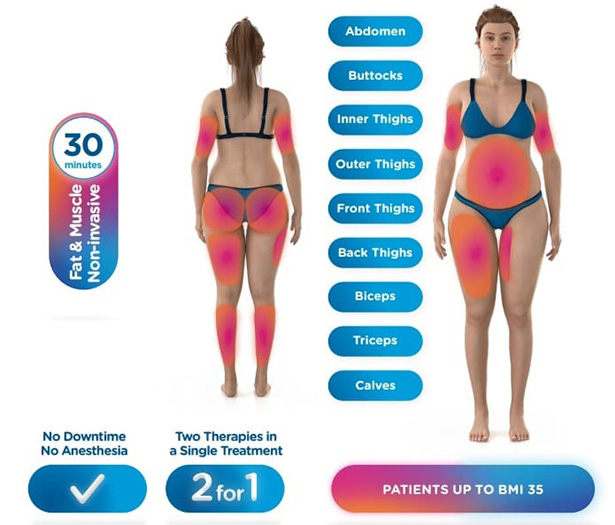 Clinically proven revolution in fat burning and muscle building What is emsculpt NEO by BTL and why is everyone talking about it? This award winning machine has caused a real stir in the industry with its revolutionary system.

If you are worried about skin laxity, old or tired looking skin, there is no need for a surgical face lift, the answer is Exilis Ultra, the modern and safe approach to skin tightening. Popular treatment areas include eyes, neck, jowls, jaw and chin. The Exilis Ultra 360 is the most leading-edge Radio Frequency treatment device available on the market today. Powerful radio frequency is delivered through the skin, causing the generation of new collagen and elastin, helping your skin to look, younger, tighter and healthier. 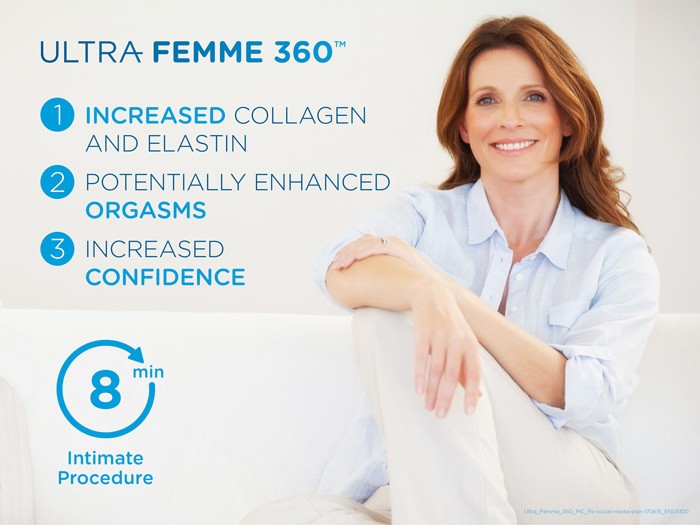 Regain your full satisfaction and well being as a woman. Ultra Femme 360 is one of the latest innovations that is proving to be a huge hit with women and the aesthetics industry as a whole. 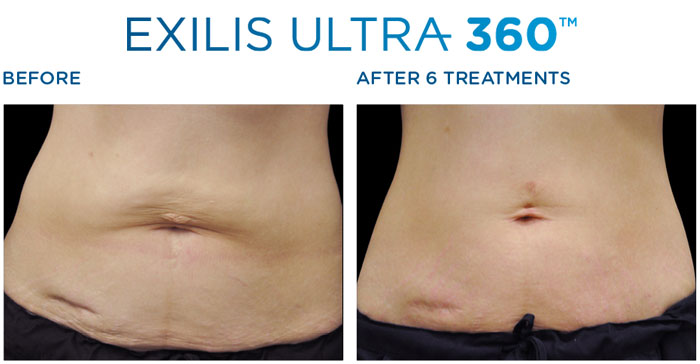 It's a fact. No matter how much some patients exercise and follow a healthy diet, some stubborn fat deposits may remain. And, despite the occasional outlandish magazine report or gadget ad to the contrary, it's impossible to tone a sagging neck and jowl or face with exercise.